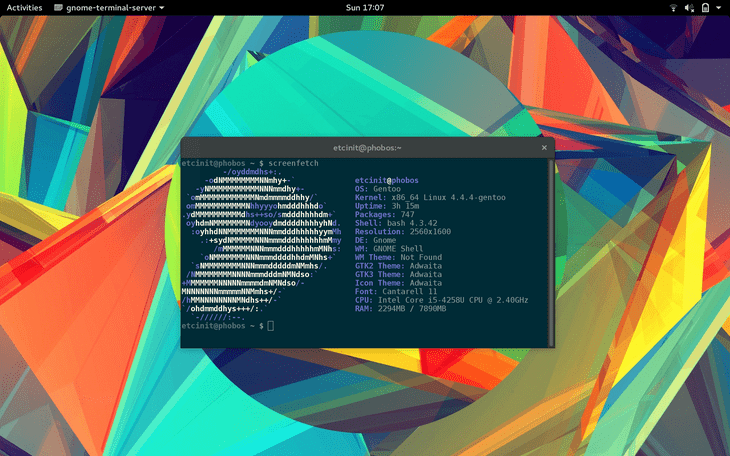 Not too long ago I left OS X and installed Fedora on my laptop. Now, over the past few days, I’ve been working on bootstrapping a Gentoo install from within my Fedora setup.

Unlike other Linux distributions, Gentoo does not have an installer. It is expected that you setup and install the system yourself. Yes. It is tedious and definitely takes longer than following a setup wizard, but on the other hand you gain some knowledge on how Linux works and end up with a custom system.

The learning factor was what convinced me to give Gentoo a try.

Given the particular route I decided to take, the Gentoo Handbook only helped on certain parts of the process. On a normal setup, you start with a live image of Gentoo containing just enough tools to install the system. It is also assumed that you will start with an empty disk or one that you don’t mind erasing.

On my case, I have an SSD that has a Fedora and OS X partitions, which are both encrypted using each operating system’s built-in encryption methods. The Linux side consisted of a LUKS partition containing a LVM setup.

Thus, the first step was to figure out how to make space for Gentoo while also avoid breaking the existing systems. Having LVM setup, certainly helped here. I shrunk my Fedora root (/) while keeping my home partition (/home) intact.

After that was done, I created a new partition for the root Gentoo filesystem and followed the section of the handbook on how to download the Stage3 archive and chrooting into the environment.

Once, chroot-ed, you can sort of begin using Gentoo and install packages using Portage. You can even run X programs if you have an X server running on the host. However, the goal here was to also boot into Gentoo directly. A chroot-ed environment meant that the system is still running using the Fedora kernel. A big part of installing Gentoo is building your own kernel and then rebooting into it.

Building a bootable kernel wasn’t too hard. I installed the kernel sources using Portage, configured it using make menuconfig, and compiled it. Once it was finished. I copied over to my /boot partition so that GRUB could find it.

A few test boots showed that the system was booting correctly (and very fast too). Unfortunately, once booted nothing happened because the disk partition is encrypted using LUKS.

Getting LUKS and LVM to work was bit painful due to how long it took me to find a working solution.

My initial attempt resulted in me trying to setup an initramfs using Fedora’s dracut tool, which was available on the Gentoo repository and mentioned in many guides on the distribution’s wiki. It seemed logical given that it was the same tool being used by the Fedora install, so getting it to work with Gentoo should have only consisted of building a similar image but pointing to the Gentoo partition.

That did not work out well. I was simply not able to get past the disk unlocking and mounting process. I think it may have been just trying to make many things work together: EFI, systemd, plymouth, cryptsetup, and lvm.

A few key things to enable on my setup was the LUKS and LVM options on /etc/genkernel.conf, and adding dolvm to my kernel command line on GRUB.

BAM! It booted, asked for my password, and dropped my into a login shell.

I still had to go back to Fedora and chroot a couple of more times until I got the right network drivers compiled. It was nice to find out that plugging in a Thunderbolt Ethernet adapter worked and did not crashed the kernel like it does on Fedora.

Another thing I didn’t realize immediately was that the genkernel initramfs does not use systemd by default, so I had to add that to the kernel command line too.

Then I continued to install software and drivers, but this time from within Gentoo. GNOME took a good 4-6 hours to compile, mainly due to WebKit taking so long.

Once I started GDM, NetworkManager, and the bluetooth service using systemctl, I finally felt like I had a fully working system on my hands.

Everything worked, except one major peripheral, the trackpad: Apparently, the usbhid driver was claiming the device before the right driver, so the keyboard worked, but the trackpad was dead.

After a few hours of debugging, I gave up and decided to try compiling the latest kernel available (4.4.4 vs 4.1.15), and after rebooting the trackpad began working, including multitouch support!

Lastly, I switched from X to Wayland, given that X had an odd issue with some letters not rendering after the laptop came back from sleep. Adding Wayland support simply consisted of adding wayland wayland-compositor xwayland egl to my USE flags, and then recompiled the affected packages. After another reboot, “GNOME on Wayland” appeared as an option on the GDM login screen.

In general, I think I’m happy with my current build and will attempt to use it as my main driver for the next few weeks. If it turns out to not have any major issues, I’ll remove my fedora partition to clear up some space.