The following is an adaptation of a report I wrote on the Minecraft AI agent I build as part of the final project for my Artificial Illigence class at UGA. Some parts of it still sound like a report.

Minecraft (1) is a popular 3D open world that allows players to mine resources and the use those resources to build structures like houses and farms.

The game feature two main play modes: survival and creative mode. Survival mode is the default game mode; it requires players to mine resources before they can perform tasks and places enemy entities in the world. The creative mode is similar to the previous, with the exception that every player has access to all resource and can build anything they want freely.

Due to how the game is designed, performing some tasks in the survival mode requires a certain amount repetitive work. Before being able to build or craft objects, the player has to look for resources and materials needed to build a certain object. In addition, placing materials in the world to build structures requires the same keystrokes to be repeated many times.

The purpose of the project is to explore whether it is possible to build an agent capable of surviving in the game’s environment and assisting other players by collecting resources for them, and perhaps even building certain structures for them.

Initially, it would seem that simple program with some predefined macros would be able to perform such tasks in game. However, when the game is in survival mode, terrains aren’t flat and there are creatures that will attack the player on sight. As a result, agents looking to interact with the Minecraft world need to be able to react to game events and respond accordingly in top of also executing the task requested.

If you have played Minecraft before, you can probably skip this part 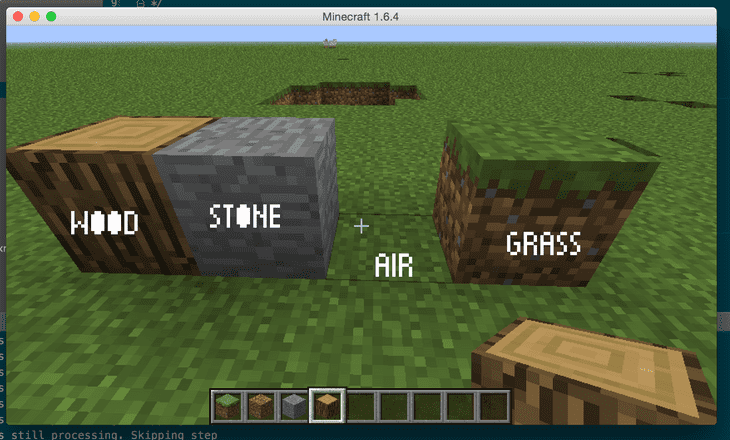 The Minecraft world can be described as a digital Lego set. The world is a practically infinite three-dimensional matrix. Each unit in the matrix is referred a voxel (a 3D pixel, cube). Each voxel can be assigned a type value, which indicates whether its air, dirt, grass, or any other material supported in the game.

There is also a day and night cycle in the game, which could be an important factor to consider when building an agent due to the fact that the game server will spawn monster or enemy entities at night, and kill them when the sun rises.

Using definitions from the Chapter 2 in the book (6): 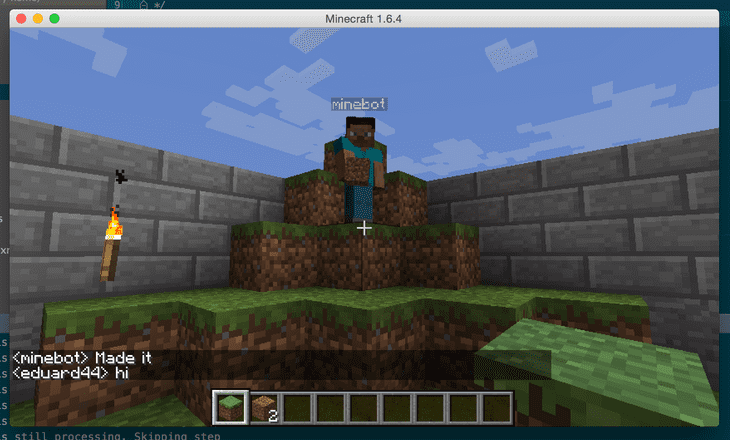 In order to simplify certain aspects of the design of the agent, I decided to divide the agent into three main components:

Each one of the components loosely represents the concepts of Percepts, Reasoning, and Actions. The learning aspect was not included in this agent, but it would be an interesting case to consider in the future.

The event handling components acts as the Percepts of the agent. It receives events and information from the game engine and applies handler functions that input the information into the Knowledge Base component.

Information captured from these handlers is usually a boolean value such as beingAttacked=true or hurt=false.

This component is essentially a simple key-value store accessible throughout the context of application. Additionally, this is paired with a rule engine, which continuously applies a collection of rules, which can modify the state of the Knowledge Base or queue new tasks to be performed.

The task tree is perhaps the most complicated component of the agent. It is capable of keeping track of tasks that the agent needs to perform, the progress of each task, the dependencies for each task, and the priority of each task.

Each task is subdivided into steps. Simple tasks can take only one step. Synchronous tasks also use one step but mainly since they need to finish before the bot can perform other tasks. Other tasks are more easily compost lie and can be divided into multiple steps.

As described before, the tree keeps track of tasks dependencies. Each task can contain a certain number of subtasks, which is what gives the data structure its tree nature, where each node is a task and its children are subtasks. However, reference to child nodes are not kept in a simple array, we use a priority queue which organizes tasks on their priority value (which can range from 0 to 100)

The main loop in the agent run infinitely and performs the following two tasks:

Events and game messages are sent asynchronously by the game server so they should be handled as they come in. When this happens depends on the implementation (single vs multithread).

For this project I decided to use Node.Js (Server-javascript) both because there is a preexisting interface for interacting with the game and it is a language I’m confident using.

The client interface is package called Mineflayer (2). The package implements most methods used by a Minecraft 1.6 client, so it is able to connect to game servers like any other player would.

For this reason, I won’t be using the knowledge base component as the sole source of information. In more abstract terms, the actual knowledge base of the agent can be thought as a combination of the variables provided by the client package and the internal KB component.

A benefit of using the Mineflayer package is that it implements certain essentials algorithms such as A∗ navigation and block finding (finds voxels of a certain material). This allows me to focus on programming higher level features such as logical reasoning and task scheduling.

In addition to Mineflayer, I’m using the following packages:

Event handling was relatively easy to implement since the Mineflayer package provided an interface for listening on events. Example:

The storage knowledge base was implemented using a HashMap class (check FactCollection.js on the source code for the complete implementation), which pairs a string with an object. For most variables, I used booleans, but I also allowed other object types to allow the KB share information with Mineflayers. Some of this objects are references to game entities and blocks, which contain useful information as health and position. Example:

The reasoning subcomponent was done using a rule engine, which loads all rules defined inside the src/Rules directory, and continuously applies them against the FactCollection.

As an optimization, each rule is capable of specifying which facts need to be defined in order to even be considered. Once the set of rules has been narrowed down, we check which rules should execute, again by using another custom function on each rule.

As a result each rule contains at least the following components:

A possible future alternative would be to create or use a logic language to define rules (e.g. First Order Logic), since the current approach is more comparable to a brute force approach to writing rules.

The task tree was implemented using pointers (or references) and simulated queues using arrays. Each BotTask node has a subTasks array which keeps references to the child elements of that node.

The step method in the taskQueue uses the subTasks array in each array to determine which task should be performed next or which should be continued. Queues (and Priority Queues) are not natively available in JavaScript so they are simulated by doing a stable sort by priority value on the array. This partially keeps the order in which tasks where added and gives priority to tasks with higher priority values.

Tasks are available under the src/Tasks directory:

Behavior of the agent

After building the components, I was able to make the agent perform simple tasks, such as finding a block, jumping, or navigating somewhere.

By making use of the task tree, I was able to create more complicated tasks composed of smaller tasks. Such as the BuildColumn task, which requires the agent to fetch materials first before building a column.

The conditions in which the agent will work are still more limited than I was hoping for. There are cases where the agent will get stuck navigating somewhere or unnecessarily placing blocks to get to a location where it can get more blocks. 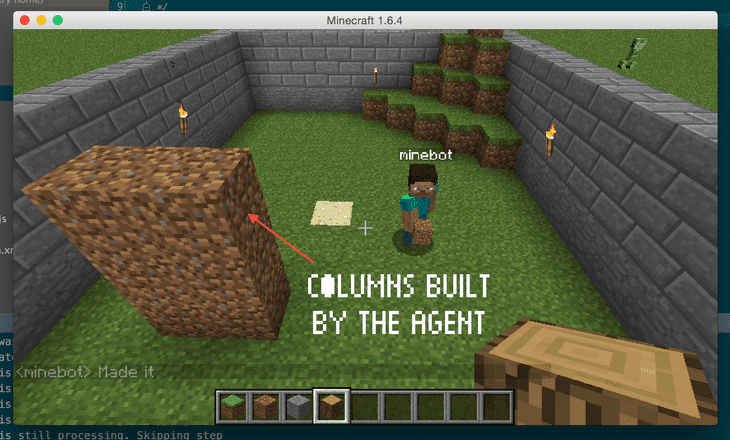 There are two videos showing progress on the agent logic:

The source code for the project is available online at: https://github.com/etcinit/minebot. Instructions on how to execute the agent are included in the README.md file

While the agent is able to perform certain tasks, its functionality is still very limited. In order to build a more useful agent, I might need to write a larger amount of rules and tasks. However, the current agent should be able to provide a good enough foundation for writing more complex rules.

It would be interesting to explore genetic algorithms for allowing the agent to learn how to perform tasks. The main difficult seems to lie on connecting a genetic algorithm with the task tree.