Coming from OS X, I’ve grown accustomed to Tunnelblick, which is one of the best OpenVPN clients for the platform. It is not perfect and there are many commercial offerings out there that have a much nicer user interface, however Tunnelblick gets the job done and it’s open source.

On Linux, the story is a bit different. Most distributions come with NetworkManager, which is, as the name implies, a daemon for managing network connections. For most systems, it is the component that takes care of connecting to Wi-Fi networks, setting up an Ethernet connection when you plug in the cable, and even 3G/4G modems.

NetworkManager has support for plugins, which has led it to support many VPN protocols, including OpenVPN!

...it was pleasant to find that it not only is integrated with the main networking daemon, but it also supported on the UI-side...

When trying to figure out how to setup an OpenVPN client on Linux, it was pleasant to find that it not only is integrated with the main networking daemon, but it also supported on the UI-side, where most settings can be tweaked.

However, Tunnelblick still had something I couldn’t find how to do using NetworkManager alone: Connecting to the VPN automatically and reconnecting on cases where the connection is dropped.

For me, this is a must have feature for VPN clients, given that I tend to roam a lot with my laptop and can’t remember to connect every time it connects to a new network.

Some initial digging led me to an Arch Linux wiki page describing how to write a script which sort-of achieves what I’m looking for. However, the approach seemed brittle and insecure, due to the fact that you have to make the connection available to other users on the system, and in some cases write connection secrets in plaintext.

After a while, I attempted to start writing a small daemon that would monitor D-Bus and respond to NetworkManager events by determining if a VPN connection should be started or stopped. An initial version was capable of determining if the VPN connection is active. However, due to lack of free time to work on it and the complexity of keeping track of the state of the machine, I decided to put it on hold.

While working on this project, I did discover that NetworkManager does have some of this functionality built-in. It turns out you can specify a VPN to connect to as a requirement for some connections to succeed: 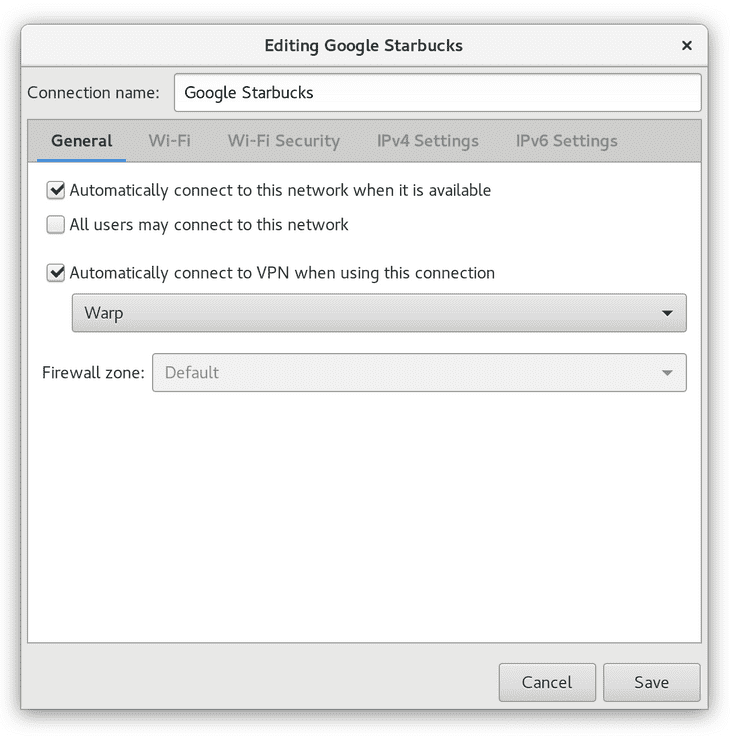 On Gentoo, this configuration can be accessed using nm-connection-editor, which can be installed using the gnome-extra/nm-applet package.

This is working great so far, but it does required some manual configuration for every new connection you setup, which can be annoying if you roam through many Wi-Fi networks.

In the future, I might resume work on the D-Bus approach in order to automate this a bit more. I would love it if my laptop simply did not trust any network and automatically attempted to connect to a VPN. It would also be nice if this is only attempted after a hotspot login is shown. For now, however, this should be enough.